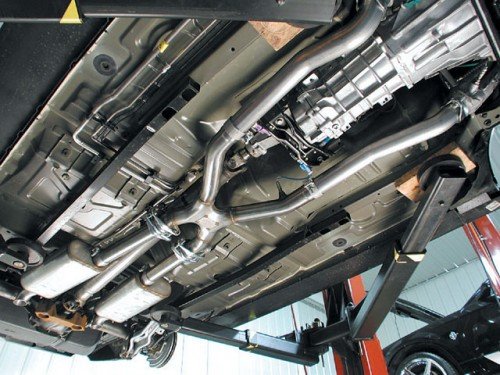 Technicians making a mobile auto exhaust repair must understand all the components that make up a vehicle's exhaust system.  For example, an automobile's exhaust system is comprised of the exhaust manifold, oxygen sensors, catalytic converter, muffler, and tailpipe.  Todays's cars have sensors that identify a whole host of problems from improper fuel mixture to a shot catalytic converter.

Modern cars have two or more oxygen sensors also referred to as O2 sensors.  As the name indicates, it calculates the amount of oxygen in the exhaust.  It then sends that information to your vehicle’s onboard computer.  Then the computer can add or subtract fuel into the air/fuel mixture to maximize fuel economy.  Oxygen sensors are mandatory on all modern autos as they greatly help in decreasing poisonous emissions into the atmosphere.  Another emission control component is the catalytic converter.  Finally, a car's catalytic converter converts harmful carbon monoxide and hydrocarbons into water vapor and carbon dioxide, both harmless byproducts.

A car's exhaust system is a semi-complicated component as it has to be made in conjunction with the powertrain and the chassis.  For example, it's necessary to snake and fit the pipes and components like the muffler and catalytic converter between chassis support members.  This is because they have to be kept out of the way of the powertrain components like the transmission, driveshaft, and the rear differential.  Mobile Mechanic Huntington Beach can handle exhaust repairs on these components as well as any other automotive service issues you may have.  Give us a call today.