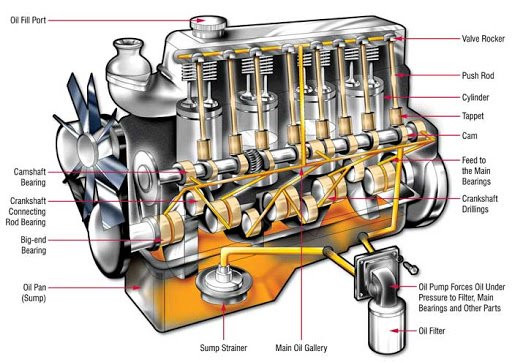 The job of an engine's lubrication system is to move oil to all the internal parts and provide lubrication to reduce friction. Oil takes a key roll in the expected lifespan of an automobile engine.  In the event that the lubrication of the system falls short, an engine would succumb to overheating and quickly fail.  Engine oil is housed in a large reservoir called the oil pan.  An oil siphon is situated on the base of the engine. The oil flows through a strainer at the bottom of the engine called the sump, where it filters the bigger contaminants from the bulk of the liquid. From the negative pressure from the oil pump, the oil at that point is sucked through a passage where the oil pump forces it to the oil filter.  The oil filter removes very small contaminants before pushing the oil through oil galleys and lines to all the various internal engine components.  A pressure regulator ensures that constant oil pressure is maintained so that the parts of the engine are always bathed in oil.  Oil flows through holes in the crankshaft and the main bearings to lubricate them and the connecting rods.  Oil also follows the rocker assembly down hollow pushrods to lubricate the hydraulic lifters, valves, valve springs, and camshaft.  There are also small oil spritzers that spray oil on the underside of the pistons and surrounding parts.  This oil flows through to the rings where a thin film of oil coats the cylinder where.  Oil from all these various lubrication points ultimately flows downward through other oil passages to the oil pan where it is collected again by the sump where the process starts all over.

Although your engine oil is the primary lubrication concern, there are other vehicle component fluids like the transmission and differential that must be monitored in order to maintain a safe vehicle.  No matter what your repair needs are, Mobile Mechanic Huntington Beach has repair services for them all.